A Home For Christmas Tale

At HabiJax, we believe everyone deserves a decent place to live. Our team is dedicated to setting the path to homeownership for deserving individuals within the Jacksonville community.

That’s why HabiJax is hosting the Home for Christmas Challenge once again to help a local Jacksonville family buy its first home. For hardworking people like Xavier Jones and his family, homeownership has a significant impact on finances and quality of life. 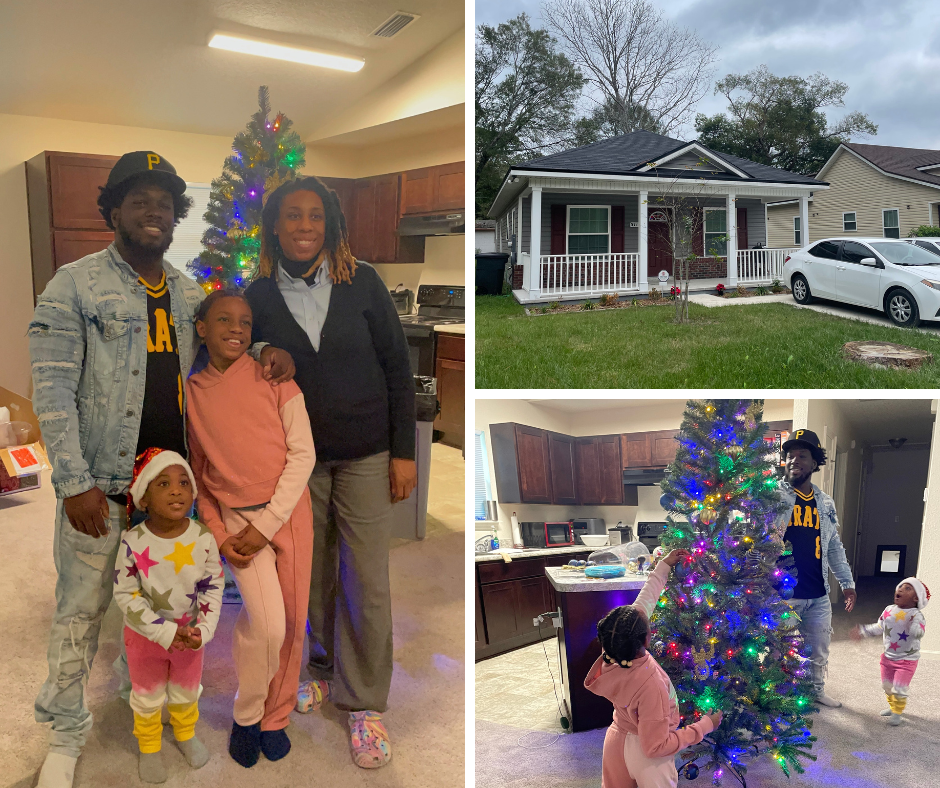 Xavier has always believed that setting goals for yourself means doing whatever it takes to achieve them, no matter the obstacles that lie ahead. This year, Xavier’s dream of homeownership came to life just in time for the holidays. We sat down with the new homeowner to learn more about his path to creating the life for his family that he’s always dreamed of.

Born in Tennessee, the 26-year-old spent much of his childhood in Cuba where his father was stationed during his time in the military. Years later, Xavier moved to Jacksonville where he became a delivery driver and a father of two girls, ages eight and two, dedicated to finding better ways of life.

Growing up, Xavier always wanted to have assets of his own. He believed that applying to be a homeowner was a great first step to achieving this goal. When he learned of HabiJax and the support that they provide, he knew that the opportunity was meant for him.

“HabiJax offered us stability,” Xavier said. “At that time and place in my life, I was in need. Our previous apartment management didn’t take my family’s issues seriously.” While managing two jobs and raising his children, Xavier partnered with HabiJax and began his homeownership journey.

Homeownership wasn’t Xavier’s only goal. He began working with the HabiJax team to accumulate his required sweat equity hours and enrolled in courses on financial literacy to help better manage his finances.

Despite the overwhelming support that he felt from HabiJax, his family and friends, the process didn’t come without challenges. “My case took nearly two years,” said Xavier. “I had some setbacks within my jobs, and it took a little longer than normal.” He worked each day to find a balance between working and gaining the sweat equity hours that he needed to own a home.

“The team helped me a lot,” Xavier said. “They taught me many things that I didn’t know about home ownership, and even brought gifts to me and my girls.” One of those gifts was a Christmas tree delivered to help the family celebrate their first holiday at home.

On September 26th, 2022 Xavier closed on his new home just in time for the holidays. After two years of dedication and hard work, his dream of home ownership finally came to fruition. “It was a breath of fresh air for myself and my family,” said Xavier. “A lot of weight was lifted off my shoulders.”

To Xavier, homeownership means independence. He is now able to take maintenance issues like air filter replacement and heating and cooling into his own hands, rather than waiting months for assistance from property management.

According to Xavier, life is now about “what’s next?” for the Jones family. “It’s about building from here. We are very fortunate to be in this position, and I can now save like I want to and invest in the future. We were living somewhere that we weren’t comfortable, and I’m now able to put money towards the things that my girls need.”

He advises anyone thinking of applying to be a HabiJax homeowner to stay the course. “It took me almost two years, but it’s most definitely worth the hard work,” he said. “It’s going to be a journey; it won’t be easy. You’ll have ups and downs, but the outcome is yours.”

Join the Home for Christmas Challenge

Every family deserves the chance to own their own home. HabiJax is committed to providing as many Jacksonville families with an affordable mortgage as possible. This December, create a team for the Home for Christmas Challenge to help give another deserving family the gift of home.